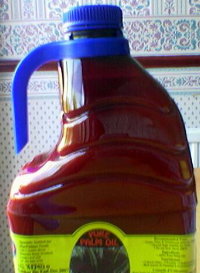 Palm Oil is an orange to red vegetable oil with a distinctively delicious flavour made from the juicy pulp of the African oil palm tree fruit called Elaeis guineensis.

The fruit is no larger than grape fruits, but has a central nut, the palm kernel (which is used in making palm kernel oil) enclosed by the soft juicy pulp (from which the red oil is made).

It grows freely and widely through out tropical Africa. It is the highest oil producing tree known to man.

This oil is red due to its very high content of beta-carotene – the same agent that gives carrot its colour, and known to protect humans from many cancers and heart diseases.

When boiled for a few minutes, the beta-carotene is oxidized, leaving the oil while or any shade thereof, depending on how much it is allowed to oxidize.

Palm oil is the richest edible oil known to man!Oil from this palm fruit is a commonly used ingredient in preparing many authentic traditional African foods.

It has a lovely uniquely strong flavour.

This highly nutritious cooking natural oil is used all across tropical Africa, especially in West Africa, the Caribbean, and South America in making various dishes.

It "is the most widely produced edible oil", reports the Wikipedia Encyclopaedia.

In Brazil, it is known as the dende oil. If you are looking for the Brazilian dende oil, you have come to the right place. This West African prototype is however thicker than the Brazilian one because this oil from Africa is not diluted.

Have not used it before? Why not try it?

It is commonly used in preparing:

Apart from use in soups, this red oil from the African palm tree is also used in making margarine, soap, candles, chocolates and cosmetics.

It is called Zomi especially in Ghana.

It has also found usefulness in many manufacturing process.

For political reasons, the use of oil from palm fruit is not been promoted in the western world, reports the Times Magazine.

It is never-the-less finding renewed relevance, buoyed by concerns about climate change and need for development of renewable fuel source, giving the very high yield of palm oil in provision of bio-fuels.

An emerging use of this oil in many countries now is its use in production of bio-diesel. This is because when processed, palm oil has the same properties as diesel, and can be used in driving diesel engines.

The Oil palm fruit originated from West Africa. It has helped in restructuring the political landscape amongst the Urhobos and Itsekiris of Delta state of Nigeria up to this day.

It is said that as early as 5000 years ago, oil made from palm fruit was already known in Egypt.

Today, Malaysia is the Word’s largest producer of oil from palm fruit.

This was introduced to the Malaysians from NIFOR (National Institute For Palm Oil Research) Edo State Nigeria, though reports have it that the very first introduction of this high dollar plant to Malaysia was in 1917.

Malaysian palm oil is thus to a very large extent like the Nigerian tpe.

Trailing Malaysia in world production of this increasingly popular oil is Indonesia.

Make This Oil at Home

Do you have access to palm fruits? You can make your own home made palm fruit oil in the easy to follow steps. Zomi or cooking palm fruit oil is made by boiling ripened and already harvested palm nut fruit in a big pot for about 40 minutes until it becomes soft and tender.

The cooked fruits are scooped into a big mortar and gently squashed with a pestle, avoiding damaging the nut, but only to squeeze out the juice on the covering pulp. Once this is done, the juice obtained is filtered to remove the shaft and then boiled again.

At this stage, the fresh oil would be seen floating on top of the content of the pot which is scooped off into yet anther pot. Done. You can make as much oil as you want.

Fresh oil from palm fruit is traditionally used in eating roasted yam or plantain in Africa, especially in farms after a hard day’s job.

The nutritional and health benefits of palm oil are staggering. It is 15 times richer in beta-carotene than carrot!.

Beta-carotenes are very important form of vitamin A that help protect our body against many diseases like Alzheimer dementia, heart attack, cataracts, arthritis and cancers, by acting as anti-oxidants. Anti-oxidants acts by protecting cells against dangerous chemicals released by our cells called free radicals; much the same way that anti rust protects metallic objects from rusting.

Cooking palm fruit oil remains the largest source of tocotrienols – a form of vitamin E known to man. This helps in protecting the body against diseases like cancer, blood disorders,and help maintains good skin and fertility.

It is also very rich in the form of vitamin A that helps in ensuring good vision and preventing night blindness and many other types of eye problems.

There is nevertheless negative publicity against palm oil. It is said to contain too much saturated fatty acid that is implicated in increasing the chances of heart diseases. The true position remains a matter of debate.

Research has shown that red palm oil does not increase the risk of heart problems in individuals that have normal heart and good diet / habits. It protects the heart from many diseases, as well as the digestive tract.

The people of Delta State Nigeria, mainly Urhobos and Itsekiris, as well as the Ashanti (Ghanaians) have palm fruit oil as a constituent of their meal on daily basis, and do not have a higher cardiovascular (heart disease) incidence than those in Western countries, as would be expected if it truly poses a heart health risk.

There is no doubt that cooking palm oil is by far healthier than many cooking oil sold around.

Next time you want a natural vegetable free from Cholesterol, high in anti-oxidants, beta-carotene, vitamin E forming compound and no Trans oil, then go for palm oil.

Where to Buy Cooking Palm Oil

You can buy cooking palm fruit oil online here by the click of your mouse.

It is also sold in most African food shops all over the world. If you happen to be looking at this page from outside the UK and want this cooking oil delivered to you, then why not buy palm oil at from us buy putting in a special request.

We will let you know what the postage cost is and get back to you.

It is imported into the United Kingdom from Ghana, Ivory Coast and Nigeria. The Ghana variety is often called Zomi.

It comes as a one, two or four liters bottle. Put in your order now and get it delivered to you within 2-5 working days wherever you are in the UK.

To reduce the postage cost, why not look around and buy more items here and your order would be delivered in bulk.


If you are looking to buy palm oil for cooking, you can get it in different litre containers here.

Thank you for visiting us. Do not forget to join our mailing list to get regular updates on great bonanzas and sales of African foods here.

Have your say about what you just read! Leave me a comment in the box below.
[?]Subscribe To This Site